Another post based on a retro post that I wrote in January of 2007.  I was always a fan of Ask.com as a search engine and at the time, ASK was ahead of the other engines in terms of what they were displaying in their Search Results.  They definitely inspired what we would later see in Google and other engines.

I tested this in 2007 based on various search queries that were NFL related.  Here’s an example of a search of “nfl playoffs” back in early 2007.  How things have changed, or have they?  For all you football fans, the 2018 NFL season kicks off on Thursday, September 6th as the Atlanta Falcons take on the Superbowl champions Philadelphia Eagles.  Here’s a look at the rest of the week one NFL schedule: 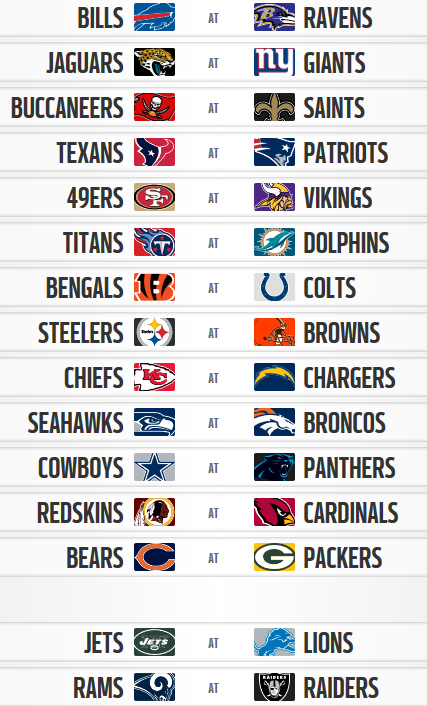 Retro Post: ASK.com Coolest SERP Out There – At Least When it Comes to the NFL

(Note some links may no longer be active and SERPs may have changed from the time of the original post).

For the past couple of years, ASK.com has been relegated to the number five position (although recently number four surpassing AOL) when it comes to search engine market share. That’s too bad because personally I think that ASK is a pretty good little search engine and deserve more. For one thing, their results are more relevant than you would think. I would rank them up there with Google in terms of relevancy.

The one area where I think ASK is ahead of the game is with their Search Engine Results Page (SERP). As search grows, and the major engines look to reinvent themselves, you are going to see a lot of changes in the SERPs. The main reason for this is because of personalization. ASK understands this more than the other engines do. ASK sincerely wants to provide the user with the best search experience. For the most part they do a good job. They definitely provide the most exciting Search Engine Results Page.

Here’s a little test that I tried. I performed a query for “nfl playoffs” in Google, Yahoo, Windows Live and ASK. By far the best SERP returned was from ASK. 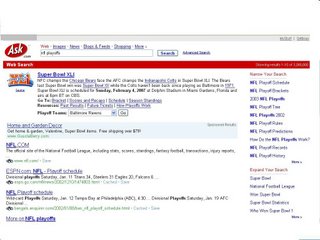 The other three engines returned similar SERPs to one-another with a discrepancy throughout the results. Here’s why ASK was better:

Windows Live presented a Top Sponsored ad for Ebay and interestingly enough, organic results from Yahoo Sports ahead of their own MSN Fox Sports results. (Their top organic listing was for NFL Cheerleader Playoffs by the way).

Yahoo presented some news stories, a bunch of sponsored ads (that I ignored) and a top organic listing from superbowl.com listing the playoff schedule.

Google had the most boring SERP returned with some news listings and the top organic result being nfl.com It was interesting to note that their was only one side sponsored ad (everyone must be saving their money for a 30 second spot on the Super Bowl) and that the number ten listing was for a “ticket broker” (ticket scalper?) site. How’s that for relevancy?

For the little guy, ASK seem to be the best at listening to what their users want to see. They are way ahead in changing the landscape of the traditional SERP that we are all accustomed to seeing. Seriously much longer will users want to see a plain white page with blue links? ASK puts the pizzazz in the SERP.